Few cities in the world can boast of Rome’s vast spectrum of things to do and see. Roman ruins, holy sites, beautiful art, great food… Rome has it all.

It is said that Rome is the city with the most monuments in the world — fitting for the capital of the ancient Roman Empire, a place willing to unashamedly call itself the Eternal City.

Its Centro Storico (historical center) area contains some of the most important surviving vestiges of the Roman Empire such as the Colosseum and the Pantheon, as well as iconic and holy sites like Saint Peter’s Basilica in the Vatican, the Sistine Chapel, and the Fontana di Trevi.

If you want to be near the Colosseum and many of Rome’s other archaeological treasures you’ll want to stay in the Centro Storico, and for that purpose we’ve put together a list of some of the best hotels in the area, as well as a few highly rated bed & breakfasts, for those searching for more informal and intimate accommodation.

The 10 best hotels near the Colosseum

The list contains a variety of establishments in different styles and different price points, all within walking distance of the Colosseum and many of Rome’s other important monuments.

Hotel San Anselmo is a boutique hotel that occupies a beautiful 19th century villa in the Aventino area. Rated 4 stars, the Colosseum, the Pantheon, and the Piazza Venezia are all less than 2 km away. The hotel has a garden where guests can enjoy breakfast during the good-weather months of the year, full wifi access, and its rooms have charming features such as large four-post beds and free-standing jacuzzi bathtubs. 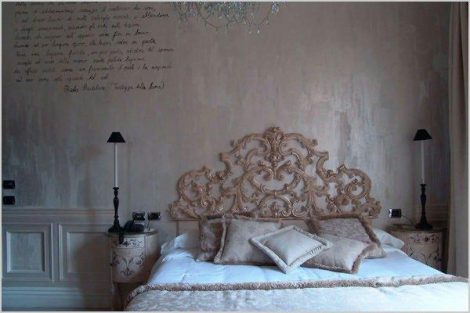 Hotel Paba is a small, cozy, 2 star right in the middle of the Monti area. The Colosseum and the Roman Forum are both less than 500 meters away, and the area is full of little cafes where you can enjoy Italy’s famously intense espresso — but don’t go calling it that! the correct term is caffè. The Hotel Paba boasts affordable prices in an area that is often on the expensive side, and all its rooms are clean, bright, and have air conditioning, wifi, and satellite television — an ideal launch pad to explore Rome’s historical center. 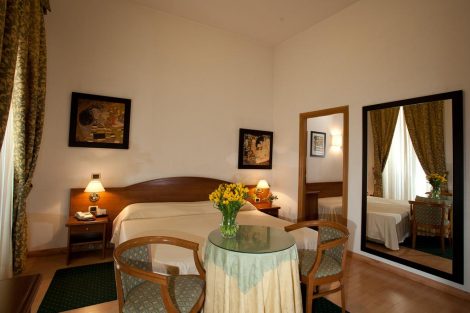 Scarcely three blocks away from the Colosseum, the Capo d’Africa is a lush 4 star hotel with a rooftop terrace and restaurant where guests can enjoy breakfast and meals with a view of the Italian capital. It features contemporary Italian art and modern interiors, rooms are all air-conditioned, with wifi, and guests have access to the hotel’s gym. 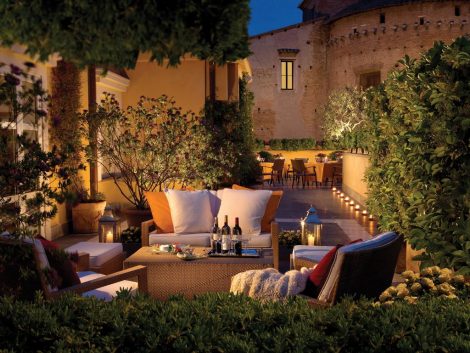 Occupying a 19th century building two-minutes walk from Rome’s Opera house and the Repubblica Metro station, the Britannia is an elegant 4 star establishment offering an extensive American-style buffet breakfast, free wifi, and stylish and very comfortable rooms. The hotel runs a 24-hour reception with staff fluent in 6 languages, and is centrally located, with the Colosseum monumental area a 20 minute walk away. 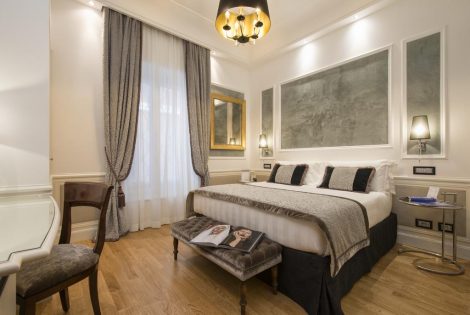 The Locanda Cairoli is a 4 star hotel set in an 18th century building with an interesting, modern decor. Rooms are individually furnished with tasteful antiques, paintings and sculptures. The Cairoli offers excellent service, a highly-rated continental breakfast buffet served daily, wifi throughout the hotel, and best of all — it is near all of Rome’s most important monuments and sights. “Difficult to think of a better location for a tourist in Rome” says it all. 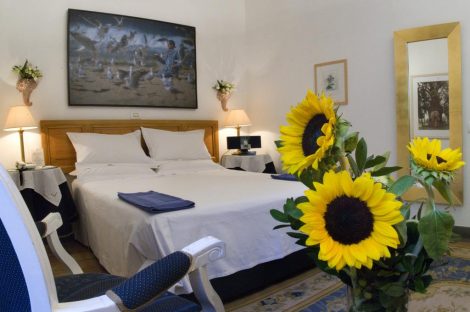 Located in the center of the city, on top of the tallest of Rome’s seven hills, the Bettoja Mediterraneo boasts a rooftop terrace with a spectacular view of all of Rome — the perfect place to relax in the evening over a glass of red wine after a day of exploring museums, art galleries, and Roman ruins. 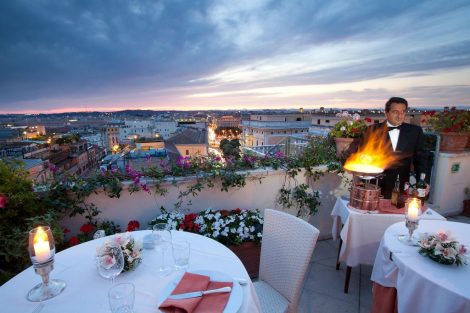 The Kolbe Hotel Rome is a luxurious 4 star overlooking the Roman Forum and within walking distance of the Colosseum. Rooms are stylishly decorated, with high ceilings and exposed brickwork. There is wifi access throughout the hotel, and guests can enjoy breakfast and meals on the terrace, that opens out onto the hotel’s garden with palms, orange, and olive trees. 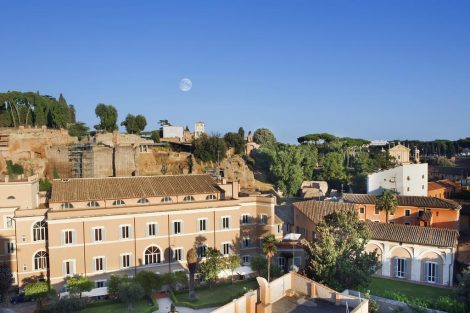 The Corner is a paradigmatic example of modernity — Set in a beautiful Art Nouveau villa in the heart of Aventino, its decor combines modern and classic, vibrant and understated, and does so with perfect taste and balance. If you’re staying, you can’t miss a visit to the hotel’s restaurant, The Corner, a Michelin starred establishment serving chef Marco Martini’s contemporary take on classic Roman cuisine. 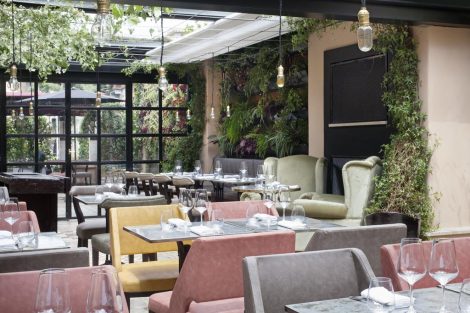 The Dharma is a boutique hotel, offering stylish, individually decorated rooms with all the amenities in a central location. 5 minutes from Rome’s central Termini station, and 15 minutes from the Colosseum and many other important monuments, the Dharma is an excellent place from which to explore the Eternal City and to relax afterwards. Some of their rooms offer a unique ‘wellness’ experience: a personal hot tub and Turkish bath. 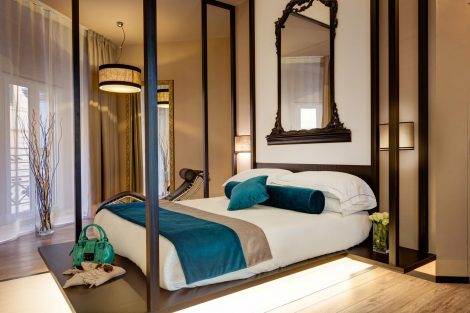 Just minutes away from the iconic Fontana di Trevi and the Spanish steps, the Stendahl is an elegant boutique hotel in the center of Rome’s old city. Featuring rooms with all the amenities, a lounge serving quality cocktails, and an extensive breakfast buffet, it’s the perfect place from which to get lost in Trevi, an area popular with tourists for its namesake attraction but also for its many good restaurants. 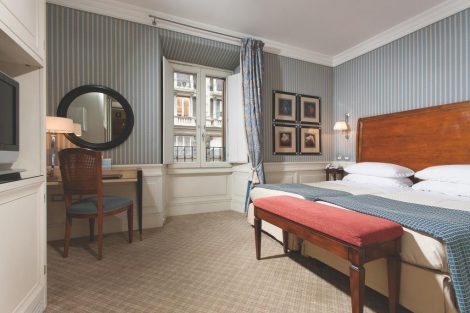 Bonus: 3 great bed and breakfast’s near the Colosseum

If you’re looking for a more economical place to stay, a bed and breakfast may fit your needs better than a hotel. Below you’ll find three great locations, all near the Colosseum.

Li Rioni is a comfortable little bed and breakfast only 300 meters from the Colosseum. Rooms are well furnished and clean, with free wifi, a private bathroom, and breakfast served every morning on the establishment’s sunny terrace. The Domus Aurea and Roman Forum are also easily accessible in minutes on foot. 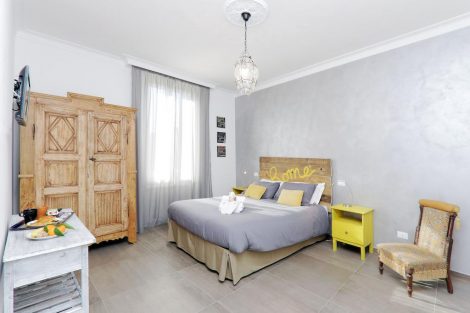 The Laurus Colosseo is practically right around the corner from the Colosseum, and only 5 minutes walk from the Domus Aurea. There’s wifi throughout the property, and if you’re interested in touring Rome in a slightly different way, they even offer bicycle rentals so you can explore the city on your terms and not have to walk long distances or rely on public transport. 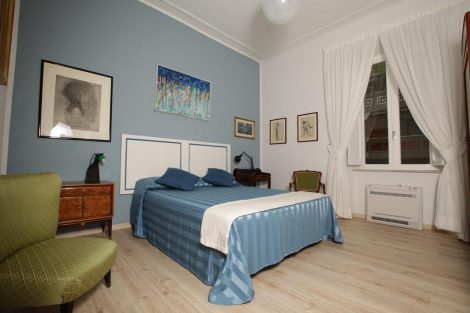 Luce is the cheapest entry on both of our lists, but that doesn’t mean it’s necessarily worse than the others. Luce is a clean and cozy B&B at a stone’s throw from the Colosseum and other nearby monuments, with free wifi throughout the property and air conditioning in all rooms. It is highly rated, offering great value for money for anyone that wants to spend most of their time in the Eternal City exploring and getting acquainted with its many sights and monuments. 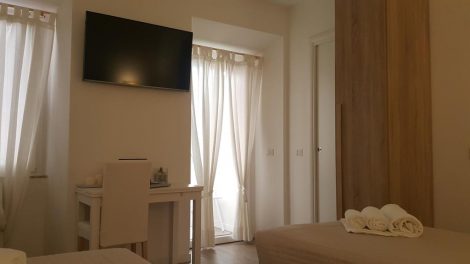