With nearly two thousand years of history, there is much to know about the Roman Colosseum. The arena once witnessed bloody gladiator battles, epic hunts pitting humans against wild animals, and gruesome executions of prisoners of war and criminals. If you’re visiting soon and want to impress your friends and family here you’ll find many interesting Roman Colosseum facts. 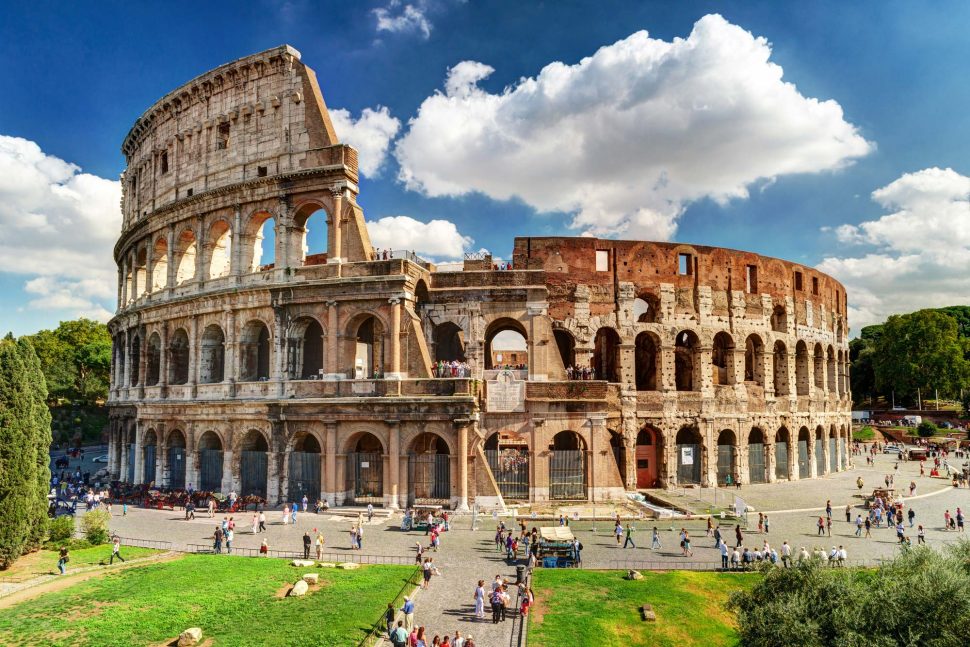 When was the Colosseum built?

Construction of the Colosseum began in 72AD, and it was completed in 80AD.

Who built the Colosseum?

The Colosseum was started under Emperor Vespasian, but he died before it was completed. Construction was finished under his two sons, Emperors Titus and Domitian. The actual building was done largely by Jewish slaves, overseen by Roman engineers and craftsmen.

How many people participated in its construction?

After gaining victory in the first Jewish-Roman war, the Jewish Temple of Jerusalem was sacked and many of the province’s inhabitants were made slaves. They were transported back to Rome and it is estimated that 60,000 to 100,000 were employed in the construction of the Colosseum.

How old is the Colosseum?

Construction of the Colosseum was completed in the year 80 AD, making the building 1,937 years old.

Why was the Colosseum built?

After the great fire of 64 AD, in which a substantial portion of the city burned, Emperor Nero ordered the construction of a magnificent palace for himself in the area that had been devastated. The palace was the Domus Aurea (which today is being excavated and can be visited). Needless to say, the citizens of Rome were not happy about this, so when Nero was deposed and Emperor Vespasian ascended to the throne, he had Nero’s palace complex torn down and ordered that the Colosseum be built on top what had been an artificial lake. The Colosseum was to become a grand amphitheater where all Roman citizens could seek entertainment.

What does the Colosseum’s name mean?

The Colosseum was originally known as the Flavian Amphitheater, because it was built by Emperors Vespasian, Titus, and Domitian, successors to Nero of the Flavian dynasty. The name “Colosseum” likely comes from the colossal bronze statue of Emperor Nero that used to stand next to the building. This statue was itself modeled on the Colossus of Rhodes.

How big is the Colosseum?

The Colosseum is oval shaped. It is 189 meters long, 156 meters wide, and 48,5 meters tall. The entire building has a surface area of 6 acres.

How many arches does the Colosseum have?

The Colosseum’s outer walls are covered in three levels of Doric, Ionic, and Corinthian columns, and each level has 80 arches. Of these, 76 are numbered with Roman numerals, still visible above them in some places. They served as guides so citizens knew where to find their seats. Out of the 80 arches that made up the external wall at the ground level, only 31 remain intact. They are what visitors see today when they visit.

What material was the Colosseum built from?

The Colosseum was built with an estimated 100,000 cubic meters or travertine stone, which were mined at the quarries of Tivoli, 20 miles away. The stone was held together by thousands of iron clamps.

What is underneath the Colosseum?

The Colosseum’s Hypogeum — which translates to underground. The hypogeum was an elaborate network of tunnels and chambers were gladiators, animals, and prisoners were kept before entering the arena. There were 80 vertical shafts to access the arena from the hypogeum, as well as an extensive network of trap doors through which scenery elements could be deployed during the spectacles.

How many spectators could the Colosseum seat?

How many people died in the Colosseum?

It is impossible to know with certainty, but it is believed that as many as 400,000, between gladiators, slaves, convicts, prisoners, and myriad other entertainers, perished in the Colosseum over the 350 or so years during which it was used for human bloodsports and spectacles.

What animals were used in the Colosseum?

(40)
Many species of animals were used in the Colosseum. Some in staged hunts, in which armed and trained humans would bring them down, others as “executioners” of people condemned to die in the arena. Lions, tigers, wolves, bears, leopards, wild boar, elephants, hyena, buffalo, hippopotamus, crocodile, and giraffe were all seen in the Colosseum at some point.

How many animals were killed in the Colosseum?

It is impossible to know exactly, but based on accounts that described hunts and spectacles and estimates on the number of events held, it is believed that the number is well into the millions. This is unconfirmed, but it is said the Colosseum was responsible for the eradication of certain species of animals from nearby regions.

What types of spectacles were put on in the Colosseum?

The most common and most well known were gladiator battles. The Colosseum also held hunts, executions (some by wild beasts, the famous damnatio ad bestias) and right at the beginning, a few Naumachia — staged naval battles for which the Colosseum was flooded.

Were gladiator fights as bloody as is believed?

Contrary to the popular vision of a gruesome free-for-all, gladiator fights were somewhat like contemporary boxing matches: fighters were divided into classes according to their size and fighting style, there were referees and doctors monitoring the fight, and often matches didn’t end in death. Match-ups were decided based on the experience, the record, and the styles of the fighters, and successful gladiators could become famous celebrities. Some gladiators had long careers in which they lost many fights without dying. However, this doesn’t mean they were bloodless, they were simply less chaotic than is often imagined. A very large number of gladiators did perish in the arena.

Were Christians martyred in the Colosseum?

Thousands of people perished in the Colosseum over the years, and some of them were undoubtedly Christian, however there is no conclusive historical evidence to support the connection between stories of Christian martyrs and the Colosseum.

Did the events depicted in the movie Gladiator really take place?

Yes and no. Commodus was a real Roman Emperor, and he was known to be a fan of gladiatorial combat and bloodsports generally, so much so that he would sometimes enter the arena himself and fight. However, when he fought he would often do so against handicapped or incapacitated opponents, or against non-predatory animals that couldn’t harm him. He was considered a sadist and these displays earned him significant antipathy from Rome’s citizens, purportedly contributing to his eventual overthrow. However, he didn’t die fighting a hero-of-the-people gladiator in the arena like in the movie.

Not officially, but in practice they might as well have been. They were member of the infame class, and upon becoming gladiators (whether by choice or as punishment for a crime) they were stripped of all their rights and became property of their owners, their lives forfeit.

When was the Colosseum last used to host fights?

The exact date is unknown, but the last records of gladiator battles date from the year 435. The Colosseum was still used for hunts after the gladiator battles ceased, these went on for another century approximately.

Why did gladiator fights in the Colosseum stop?

Contrary to popular belief, gladiator fights didn’t cease because of the Empire’s move towards Christianity. Rather, cost was the determining factor. The Colosseum was in a state of decay by the 5th century, the Roman Empire was in steep decline, and the resources needed to maintain the building, pay for gladiators, and provide wild animals were hard to come by.

What catastrophes has the Colosseum suffered?

The Colosseum has experienced large fires at least three times throughout its history, and suffered from at least 4 earthquakes. These events seriously damaged the building and it has been repaired and rebuilt many times over the two millennia it has existed.

What has the Colosseum been used for other than as an arena?

After ceasing to be used as an arena for combat and hunts, at different points in history the Colosseum has been used as a cemetery, a place of worship, for housing, workshops for artisans and merchants, the home of a religious order, a fortified castle, and most recently as a tourist attraction.

How many people visit the Colosseum ever year?